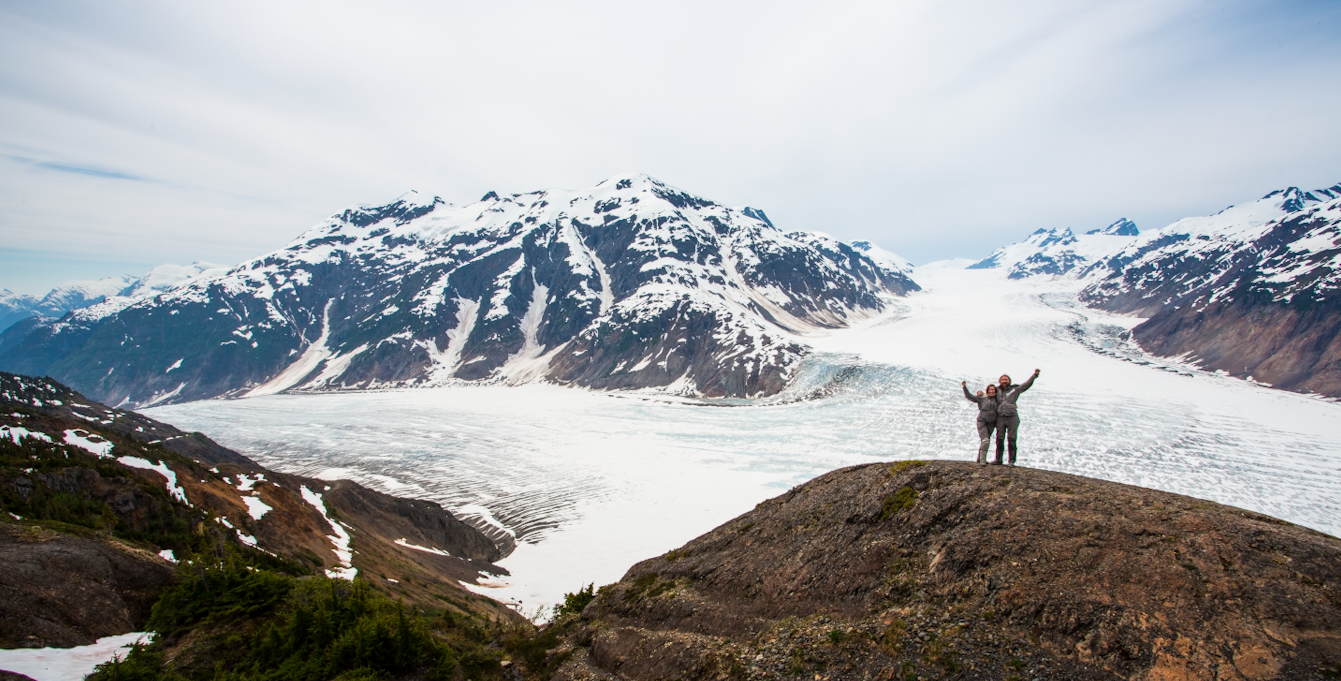 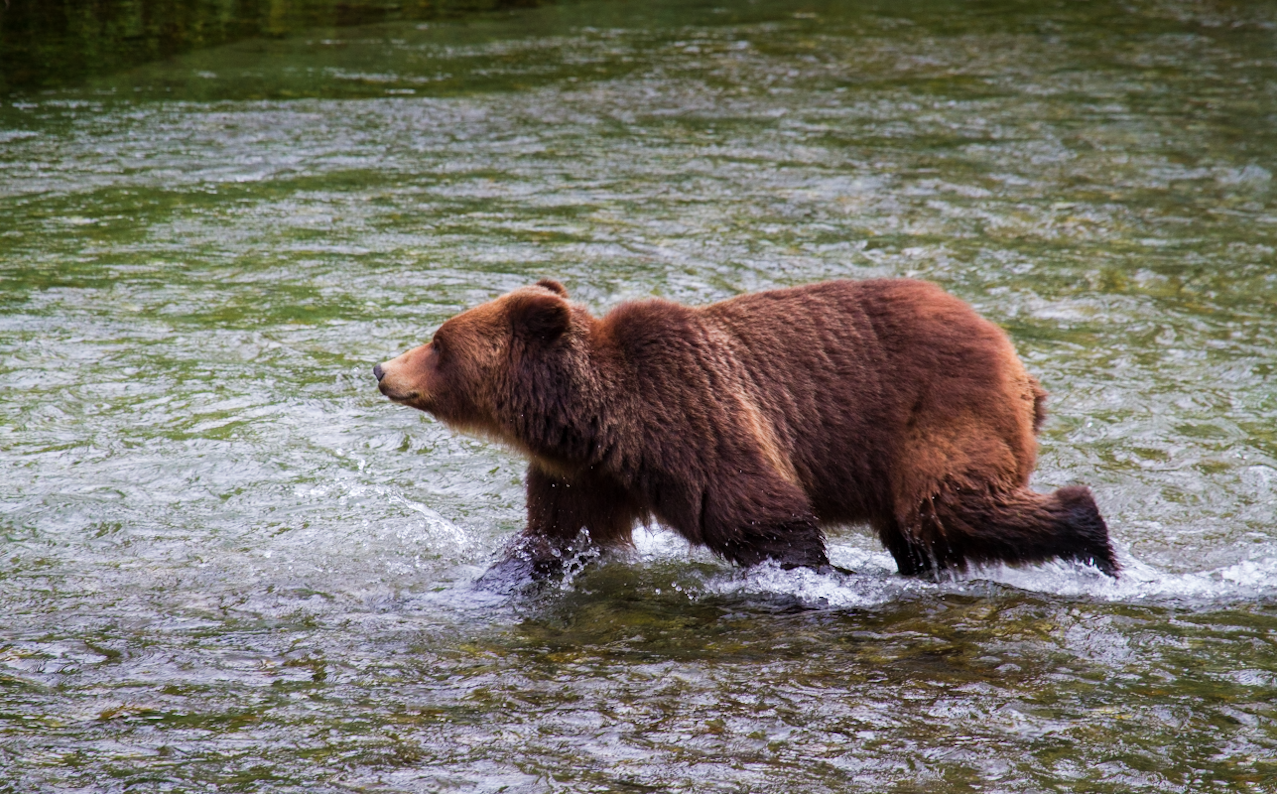 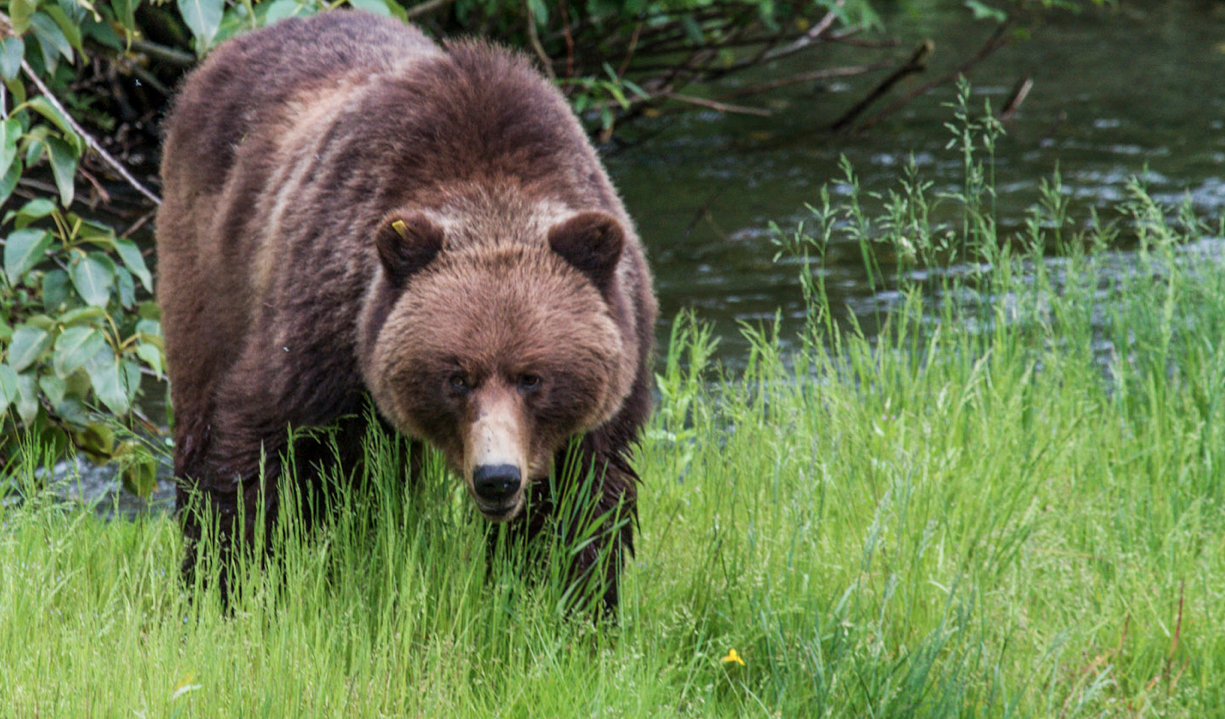 Well today we had some fun plans ahead of us. Bear and I realized that it was best to eat while moving, so that the mosquitoes couldn’t eat us too, so we took our oatmeal and strolled around the campground. I finally got to meet Kevin & Karen, and see the infamous Moto Guzzi.

Bear was right – this thing was crazy! It had so many things welded around it, frames, holders, extra wheels in parts, and a roof with solar panels… I kept staring in awe, trying to figure out what everything was and did, but by then the mosquitoes were driving me mad again. We agreed to take off on a day trip to see the Bear Glacier just down the road, then continue on to Stewart, BC and Hyder, AK to the Salmon Glacier.

We cleaned up our breakfast dishes in the lake, got our suits on, and joined the Guzzi on the road. It was so interesting to watch how it moved – they were riding two-up on the motorcycle, but since there were so many add-ons, it moved more like a car, or hover pod of some sort. It also had this Mad Max appeal, in that there was a lot of black metal and dust and moving bits that made it difficult to distinguish the framework of the original bike below, and now that I had both Bear and the Guzzi in my field of vision, it felt like a real adventure.

The Bear Glacier was literally right off of the road, was steep and abruptly ended in a big lake. All of the dirt around was muddy, or on the verge of wanting to dry out, and I realized I’m not the kind of gal to want to hike up a glacier if I have to cross through that first. So we just took a bunch of pictures from the side of the road, and continued on to Stewart.

When we first turned onto the Alcan Highway, Stewart was a destination on the large sign, so it felt like a very big deal that we were going there. I also didn’t realize how close we were to Alaska, and after we drove through Stewart and took a few more turns, we were suddenly in Alaska! There wasn’t even a customs crossing for America, and now the road signs were in miles instead of kilometers. We were in Alaska! How strange!

Civilization waned very quickly, we passed a wooden bridge area that we assumed was for bear watching, and then the newly paved road gave way to very loose gravel. This road was travelled by semi-trucks and big construction trucks as well as the motorcycle and RV tourists looking to view the glacier ahead.

We rode this gravel road that wound and twisted along the mountain’s curves, with a steep drop-off to the side, similar to Highway 1 in Big Sur. We rose and rose, and all of a sudden the dirty river below became a frozen mass of ice. We had made it to the glacier! The road kept going, and we had ridden this far already, so we decided to see if there was a “top” to this mountain.

What a good decision! The road actually flattened out at the top, and opened up to a parking lot with nice outhouses. There was a couple making lunch in their Jetboil, another couple on a motorcycle, and us. We immediately ran all around, up rocks, taking photos, admiring the view and our tenacity for having driven 16 miles on gravel to get here. Bear took out all of the cameras and started capturing the beauty, I took off on a hike to see if I could see the other side of the mountain, and we just enjoyed ourselves up there.

Travelling with our newfound friends on a scenic day trip was such an unexpected surprise! I couldn’t believe that if Bear wouldn’t have been drawn to their crazy motorcycle, then we wouldn’t even be experiencing this right now. It’s times like this that I’m so glad that Bear likes to talk to strangers 🙂

We rode down the gravel road faster than when we came up, and we were all hungry for lunch. By this time, it was close to 4:30, and Bear & I were starving. Karen had asked at the information booth in Stewart where a good place for lunch is, and they recommended “the lady with the bus”. She makes a great fish & chips apparently, so we were hoping to find her. We rode through town, couldn’t find a bus, and rode out on the end of a pier to ask the workers. They said she was in town, just on the left, so we rode back really slowly and finally saw the sign. We turned down a gravel alleyway, and turned on another dirt road, and there she was. A cool old schoolbus that had been parked years before and turned into a restaurant. The bus seats were removed and mounted to a wooden deck outside, and that’s where you sat and ate.

We ordered the fish & chips and battered & fried hot dog for good measure, and we did not regret it. One thing that I like to treat myself with, is an occasional root beer float. They had delicious ice cream that melted so nicely in the root beer, and I was surprised to hear that Kevin & Karen had never had a root beer float before! I let them try it, and they understood why it is so amazing.

As we were getting ready to leave, some folks stopped by and informed us that there had just been a grizzly bear sighting up the road where the wooden bridges were. They didn’t know if it would still be there, but we decided to ride up and see. These bridges overlooked Fish Creek, and were built with the intention of watching bears safely while they passed below. I imagined that when the salmon were running, there would be dozens of bears! We were still a month or two early though, so our chances were much slimmer for seeing bears.

Sure enough, when we walked out on the platform, there were two grizzly bears feeding on grass by the creek! Bear started capturing some amazing footage – I was amazed at how cute they were, with their fat round faces and cute round ears. You could see how the larger grizzly’s lips would curl up as he sniffed the air, and to see him eating grass and then scratching his belly with his hind leg reminded me of when our cats are relaxed in their setting, just doing their thing.

It was about this time when some fool in a truck got out to take photos of the bear. He was parked on the shoulder of the road, which was about 15 feet above the creek. The bank of the creek was thick with trees and brush, and he made some noises to get the bear to look at his camera. I had never seen a bear run before, and this grizzly bear tore up the bank like nobody’s business. It didn’t matter that there were trees and brush, he was like a galloping bulldozer! Well this fool ran for his life and made it safely to his truck, but we got to see the power of the grizzly that day.

Lesson number 1: Don’t be a fool and try to get a bear’s attention.

We’ve heard lots of things up here, and most common is that “Bears are like people. Generally nice and won’t bother you. But occasionally you will meet a psycho.” We’ve also been told that “People are more dangerous than bears, you’re more likely to get hurt by some idiot than by a bear.” That’s made sense so far!

We rode home with big smiles on our faces. We had seen glaciers, grizzly bears, and eaten at an infamous local restaurant. All of this was just a day trip away from our campsite, and we were so glad to have taken the time and energy to meet new people and go on an adventure together! How could the trip get any more awesome than this?