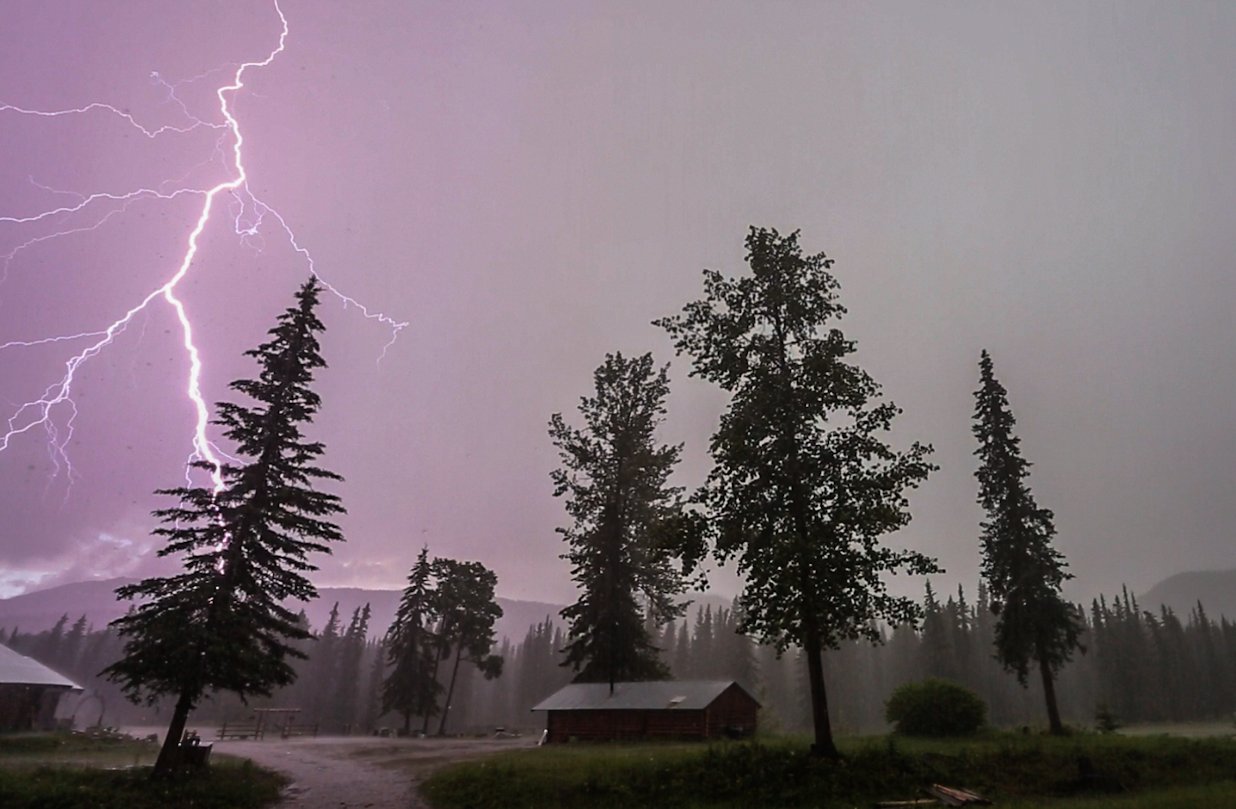 Day 21: Riders on the Storm

This morning we woke up to a cloud of probably a couple hundred mosquitoes in the vestibule of the tent. How our tent works, is that there is a large outer layer, which is the green part you may have seen in photographs. Then, on the inside is a separate section that is suspended from the tent poles, on the lower end of the tent up to the middle, which is our sleeping section. There are two large zipper sections on one wall, and one shorter half-moon zipper on the low end, like a normal tent. We love this tent because you can stand up in it, which is so handy for putting on your gear under the vestibule in case it’s raining.

Today, however, no one would want to stand up in the vestibule for one minute. These were the same hell-skeeters we had battled the days before, but at least we still had one poison wipe with 30% Deet, so we might be able to get out of here alive. Bear went first, shaking the tent while he opened the outer zipper, and hurriedly wiped his face, neck, and hands with the wipe. He snuck the other half to me inside the tent, and I prepped myself for the tear-down. Considering how frustrating it was to try and cook with these buggers, I offered to tear down the tent and things while Bear took care of breakfast.

I organized my deal, packed everything on my bike, and rode up to meet Bear. By then it had started to look like it was going to sprinkle, and I was glad that it would thin out the mosquitoes for a little bit. Fortunately too, there was a large open-sided log shelter, with a very tall roof and picnic tables inside. Bear had the oatmeal and coffee all ready to go, and we only had to swat the bugs away a little bit while we ate.

Kevin & Karen had their own packing up to do before we were all ready to hit the road, so Bear & I decided to move the rear wheel on my back some more in hopes of tightening up the chain. We already moved it back quite a bit the day before, but it was pretty slack again. Kevin  had done some work as a mechanic, so he helped advise us on the condition and how tight it ought to be. By now, Bear was getting pretty good at doing mechanics, and I just stood near his head keeping the mosquitoes off of him.

We were finally all tight, and the rain had just started to come down, so we made sure all of our zippers were shut and our rain mits on, and hit the road. We were going to ride up to Dease Lake today, possibly stopping to meet some Tahltan folks on the way. Karen is really good at talking to strangers, and had met someone earlier on their trip that said they had friends they should meet. It was only a little ways from Dease Lake, so it sounded like a good plan to stop by later today.

We rode through the rain for a little while, about 7o miles or so, then stopped at a gas station. I was starving already, and the stop had freshly made sandwiches. I picked one up and sat down next to a couple already eating their lunch. They were nice, so we started to chat about our travels so far. Ray & Karen were from the UK too, and had ridden from New York all the way down to Florida, then across the US and now up to British Columbia. Before then, they traveled in their RV and Land Rover around Europe. By then, Bear, Kevin & Karen were inside too, and we all decided to take a little break. I went to buy a coffee, and found out it was complimentary with gas! What a great place 🙂 I filled my thermos and we all grabbed a coffee. As we pulled out of the gas station, and Ray & Karen joined us, I thought to myself, “And then there were six…”

Kevin & Karen were in the front with the Moto Guzzi, Ray & Karen right behind on their Yamaha Super Ténéré, then Bear & I on our Transalps. We were quite a crew, and it looked so cool seeing a group of motorcycles all riding together. We all were headed to Alaska anyhow, so the fact that we had banded together for this leg of the journey was so cool.

We were still on the Cassiar, and there were so many beautiful lakes we were riding by with immaculate reflections of the mountains behind them. We could have stopped a million times to take photos, but we kept seeing clouds building in the distance, and it looked like they were headed our way. We stopped at one vista and saw a super cute black bear peeking up at us from the brush below! He ran to the side, stopped, peeked back up at us, and finally ran away… they are so cute with their sleek faces and pointed noses.

The next vista we stopped at had the most beautiful flat lake, then all of a sudden the mirror turned to chop as the wind picked up and started to blow Bear’s gloves across the parking lot. We hurried up and got back on the road, and kept a good clip. One more gas stop and the wind was right on us again… we had been riding in front of it for so long I was having nervous memories of storms from my childhood. We didn’t dawdle with coffee or snacks, and hopped back on our bikes.

The road was still so beautiful, some occasional sections of recent chip seal repair, so we’d slow down and speed up. Slow down and speed up. We crossed a bridge across a rushing river and started to climb up a hill. Suddenly Kevin & Karen swerved into a pull-out, so we followed suit… the turnoff for the Tahltan couple was just after the bridge, and we needed to turn around if we were going to say “Hi”…

The turnoff was a little dirt road that ran quite a ways back along the creek and up a hill. You could see that it had rained quite a bit recently, and there were potholes filled with water that made me feel really tough when the mud spattered up on my bike. The road opened up to a beautiful clearing, green meadow edged by tall pine, birch, and aspen trees. There was an old cabin that had been painted red, a newer cabin that was still natural wood colored, and quite a few outbuildings. It reminded me of a ranch of some sort, and with the amount of cars parked in the grass, I thought maybe everyone was out for a ride or something.

A well-weathered but still youthful-looking native man named Willie stepped out onto the porch as we all filed up; I felt like a cowboy with how we all parked our “horses” side by side at this strangers house. It was fun and exciting, and I forgot that we didn’t know these people yet, or that they didn’t know us either. I saw the blue metal bat by the side of the porch and said, “I had that same bat when I was in softball!” I didn’t realize until the next day that maybe it had been there “just in case”.

Kevin & Karen explained who we were, and why we were there, that they had met someone earlier in their trip that recommended we stop and say “Hi.” We were all secretly hoping that they would let us camp on their land and tell us stories about the Tahltans, but we also didn’t want to impose either.

Willie walked us around his property and explained that they had just hosted his granddaughter’s wedding two days before. He was a devout Christian, and they held regular community meetings and worship services on his land. They had recently built a large new chapel, and showed us their handiwork. Most of the materials were donated, and you could tell that the building was built with love and intention. There were plenty of original leather goods hung from the wall, with intricate needlework and stitching. I admired the slippers and boots, and shared my newly-crafted purse with my very first rabbit hide.

Willie’s wife and family had been preparing coffee for us, and they invited us to stay for coffee and cookies. We were en route to the original chapel, that had a metal roof, wooden siding about half-way up, and screens for windows. Some of the windows had clear plastic stapled around, but this was mostly an open-air building. A gust of wind suddenly swept up, and the sky turned dark and threatening. Bear ran to his bike to grab his camera, and I could hear the thunder. I asked him to grab his Roland recorder, because this was going to get loud.

I was worried with how long he was taking at the bike, because the wind was really blowing now, and there was lightening not too far away. Everyone else was in the chapel, and Willie was looking at me like, “You better get in there too!” I was giving Bear the wave, and he finally joined us.

The wind was blowing, the thunder cracking, and the lightning shooting daggers through the sky. We looked over just as a pine tree broke in half and blew across the meadow-we all worried if our bikes were also blowing over in this storm… Bear went outside to take photos, I stayed inside with the recorder and got more and more nervous. It was so loud in the shelter and I was worried that a tree was going to blow over and cave the roof in-I quickly found and put on my motorcycle helmet! It cut out the noise, but everyone was laughing at me for being so nervous…I just didn’t want to end up in a pile of rubble without head protection.

The thunder, lightning, rain and hail lasted for a solid 10 or 15 minutes, then disappeared as quickly as it had arrived. We all sat and ate cookies and drank coffee, laughing and thanking our lucky stars that we were safe and sound. Our bikes were still upright, our waterproof bags worked beautifully, and Bear got some incredible footage.

Willie took the men out for a walk to show them his original cabin. I found out that we were invited to sleep in the cabin that night before heading out on the road tomorrow. This cabin was incredible! Hand-built by the man himself, from timbers that he cleared, for the family that he raised. There were beds inside too, so each couple could put their sleeping bags on a real mattress and get a good night’s rest. We pooled the food that we each had and shared a great dinner, then started a fire in the cabin to smoke out any mosquitoes and went to bed. Bear & I slept under a giant caribou head, with antlers almost 4 feet high. He was massive.

Our group didn’t quite know how all this amazingness happened, we just new we were open to it. We all slept great that night, with peaceful and inspiring dreams, and a new sense of community on this shared adventure in Tahltan country.