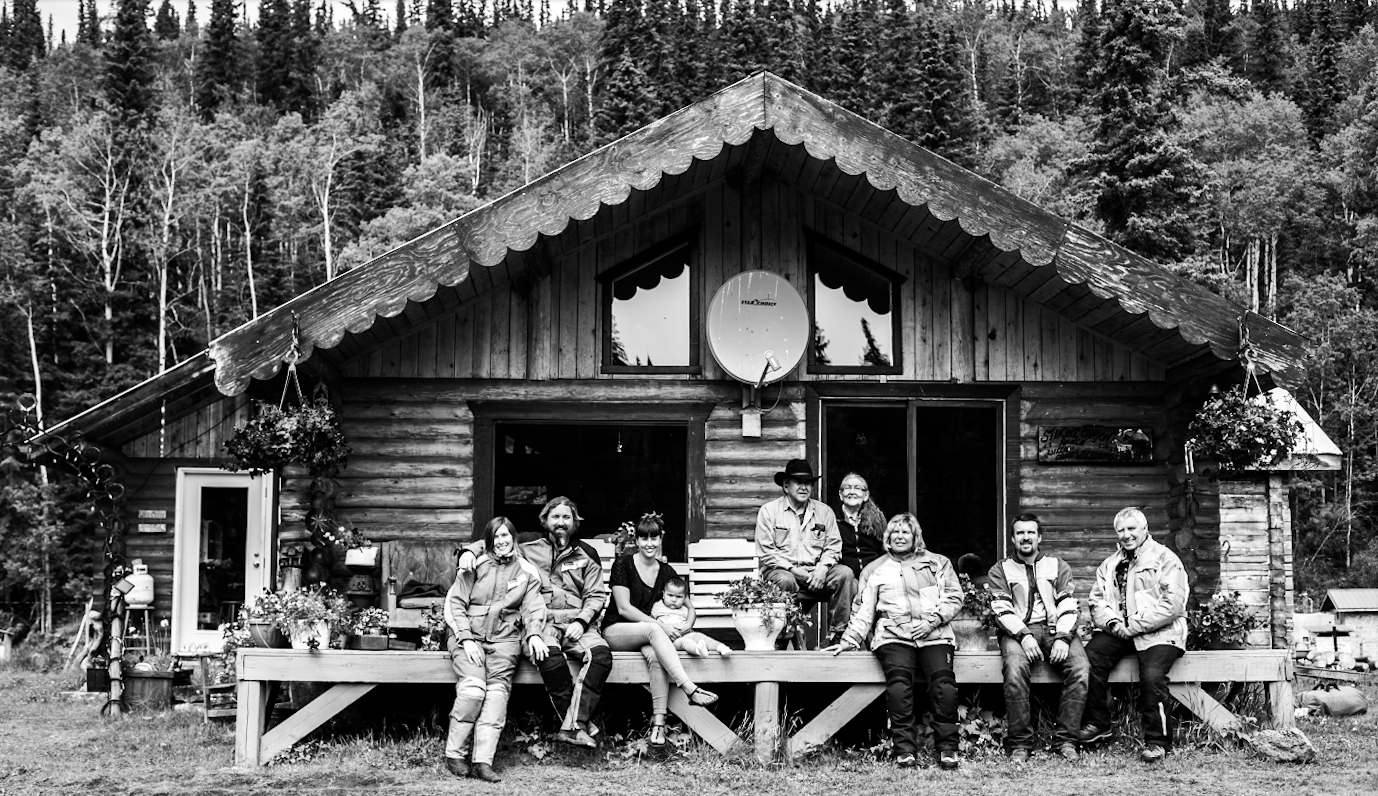 Day 22: The Group is Fortified

What an amazing way to wake up! Bear quietly crept into the cabin and I could smell the coffee before I opened my eyes. He swept the mug in front of my nose and said that breakfast was almost ready–we had been invited into the main house to share breakfast with the family!

I opened my eyes, said “Good Morning” to the caribou, and put on my fleece and boots. Grabbing my warm cup of coffee, I wandered across the green yard to the main house, clearly the last one up. I wasn’t sure which door to use, so I went to the main front sliding glass door. As soon as I saw there were no boots by the door, I realized that everyone else used the side door, but I was already inside. I took off my boots, said my greetings to the family in the living room, and walked into the kitchen. It smelled of fresh bacon, potatoes and eggs, there was the sound of lots of morning chatter-full of stories of yesterdays storm, the wedding just days before, and stories of the little baby girl.

The family here was large, and shared lots of love and laughter. They all helped with tasks, and we were glad to help clean up in whatever way we could. The breakfast was so fresh, hot, and filling. For a group this large, it was a wonder how they were able to feed 13 people with just two frying pans of food! Coffee was still flowing, as was conversation, and we took our sweet time savoring every morsel.

Once we were done eating, we helped pick up the things that had blown over the day before. Some jars had broken in the storm, and the rest needed to be washed out, so we did that at the large stainless 3-basin sink in the back of the old chapel. The water was freezing cold and fresh from the spring just up the hill, perfect for filling our thermoses and camelbacks before we’d hit the road.

We listened to the stories of how this land was found and settled, how the roads were built and the meadows cleared. How the animals were hunted and shared with the community, and how they were trying to help out their community and tribe by offering worship and encouragement to give up the drink. The Tahltan people were the center of the hub of local tribes, and had around 12-13 neighboring tribes radiating out around their borders. They didn’t have fences and relied on landmarks to mark their territory. Everyone knew where they should and shouldn’t walk or hunt, or they knew that they were going to start a war… There were similar stories that we’ve heard in the states about struggles with the government, how to keep their traditional land and the frustrations with the treaties they had been offered…

We felt incredibly fortunate to have heard these stories, shared their food, slept in their cabins and dreamt on their land. As curious white people, open and enthusiastic to help, I know we brought a sense of awe to their day as well… I was filled with stories on how to tan hides in the traditional way and admired the skill in which a lynx was skinned for it’s pelt and given as a wedding gift… I’m so drawn to this kind of substantiative life right now and was just so happy to be receiving this information first hand!

We double and triple-checked that we had cleaned and picked up what we could, leaving the cabin cleaner than we found it, and also found time to take a shower in their amazingly fresh water. Our bikes were all packed up and we took time to take photos with some of the family on the front porch. Driving down the driveway felt like we had been blessed with not only a sanctuary for the night, but a rare window into a world and people that would have just been a blur on the map as we drove by…isn’t it funny how easy it is to just veer off of the road and have a whole new experience and yet how rare it is that we take the time to do so?

As we continued north on the Cassiar, we noted where we would have been around the time that the storm struck. The trees were thin, there were mud springs on flat plains, there were rocky ditches and steep shoulders on the highway. We would have been so exposed to the storm, with no place to hide… it’s a wonder. It really is.

The road was so beautiful up here, our group was fortified and bonded in a way that could not have been planned for. We all experienced a bit of beauty and life that will always be hard to fully describe, but changed our lives for the better. We rode north with hearts wide open and grateful. The scenery met our thanks with rows and rows of violet and yellow flowers along the road’s edge, beautiful blue skies and lovely scattered clouds slowly drifting by.

We took the whole day getting to Watson Lake, and found the campsite we were looking for in Upper Liard. It was a little deserted feeling, definitely rougher than where we had been the night before, but there was a little pub with wi-fi right next door and Bear & I decided to take a load off. We were in the Yukon, and they had Yukon Gold on tap, and it tasted so good! Ray & Karen came in and we decided to get a little sauced together. We talked and shared stories of travelling, found out that they used to tour around the world in first their RV, then a tricked out Land Rover, all the time with their cat Leon! We shared cat photos and stories of all the cute things they do, how their cat loved to travel and camp, and I started to really miss our girls.

Any time I get to talk about our cats I feel so happy, and know that they are such great girls. I’m glad I took lots of photos of them before we left, and I have a kitten whisker from each of them in my talisman pouch. It’s so nice to know that they are travelling with us in our hearts, and it was so good to share that with our fellow travelers 🙂

We ended up closing the bar, enjoying one more at last call and feeling a bit surprised when a well-weathered woman kicked us out… I think she’s been there years longer than we had, and so we laughed it off on the porch. We all laughed and stumbled our way through the woods back to our tents, and decided to give ourselves a goal of leaving camp by 9:00 am the next morning. It was only midnight or so, and totally doable, but we were all a bit tipsy and aware that it might be a challenge… but maybe that’s also why it was so easy to say “Yeah! Let’s do it!”

So we went to bed with smiles on our faces and fuzzy dreams, unafraid of the prospect of wolves or bears tromping through our tents. We were now in Yukon Territory.