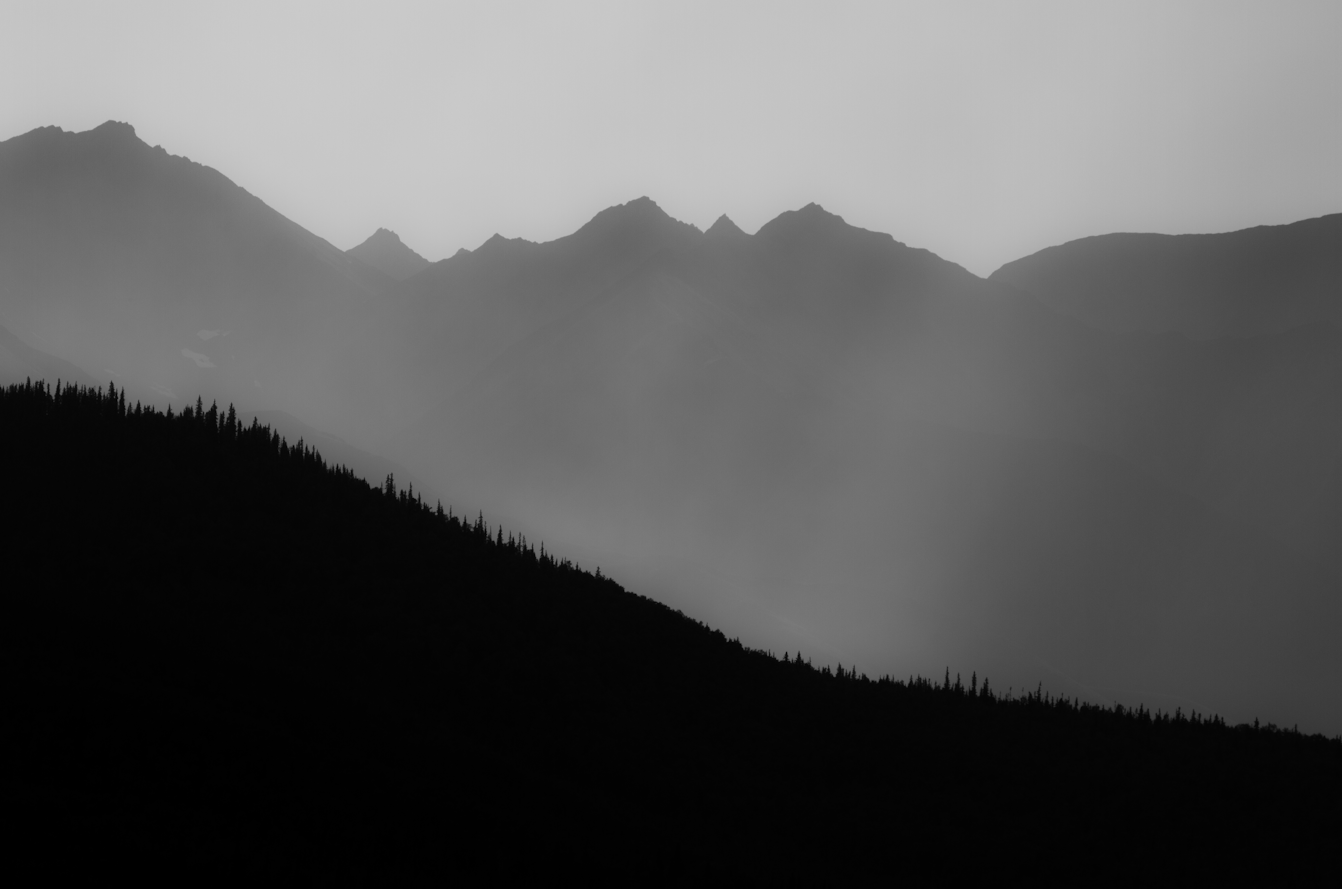 The ride from Talkeetna to Fairbanks wasn’t too far by miles, but it was incredibly diverse in landscape!

The clouds covered Denali in a blanket of white, barely revealing her foothills. “She must be a Scorpio,” I thought, “needing some privacy…”

It wasn’t disappointing to miss seeing her, we had seen some beautiful photographs the day before. I knew she must be stunning, rugged, intense and desperately inspiring. So many people traveled from so far to climb to the top, and in today’s weather, I did not envy their adventures.

We continued north, out of the foothills and onto some upper plains. The wind whipped and blew, fiercely cold. The tundra climbed up the windswept hills, forming luscious green carpets up the steepest, rockiest points. It was stunning. The grey skies behind us were beautiful in contrast to the blue skies ahead, and we could watch the rain and hail streaking almost sideways as it overtook us.

We were both so happy to have invested in our heated gear. We each had our boot insoles plugged in, as well as our gloves. Our gloves were covered in our waterproof mitts, which also blocked the wind. I had an additional piece of heated gear-a very large bib. It was windstopper on one side, fleece on the other, and I wore it on top of my layers of fleece.

We giggled to each other as we continued to ride through the storm-so warm and comfortable! Every time we would be passed by a car, or pass an RV, we would laugh, knowing how incredibly cozy we felt while still enjoying the ride on a motorcycle. What a difference proper clothing can make!

The tundra and jagged peaks gave way to rivers and hills, we rode over mountain ridges that overlooked The Land Before Time below. Valleys that were home to dinosaurs and mammoths long ago can easily be imagined in this landscape. There were rainbows in the distance, and we no longer needed our heated gloves.

We rode and rode, eventually down in the plains we had just seen. The trees were back, with moose marshes breeding mosquitoes that would hit our visors and motorcycles.

The highway turned into a freeway, leading us to Fairbanks.

Fair-banks, banks for the river banks that the town is built around. We quickly found our way to downtown, where the blocks are so tiny, homes ancient and in various states of returning to nature. Fortunately there was one establishment with a fresh paint job outside, advertising the BBQ food inside. What perfect timing, we were (of course) starving again. We shared briquet, baked beans, collard greens and corn bread with honey. Aaaah. Meals like this remind me of another trip I want to take… a BBQ tour of the south.

We were advised by locals where we ought to camp for the night, and found plenty of open spaces with clear skies above. We unpacked our soaking wet tent from the Talkeetna rains, and were glad to have the night air dry it out for us as we slept.

Tomorrow was going to be the day we made our “turnaround”, officially starting to head south on this trip.

So strange. We had traveled north for so long now, that to go south meant coming home, but we still had many days of adventure ahead of us, on roads not yet travelled.