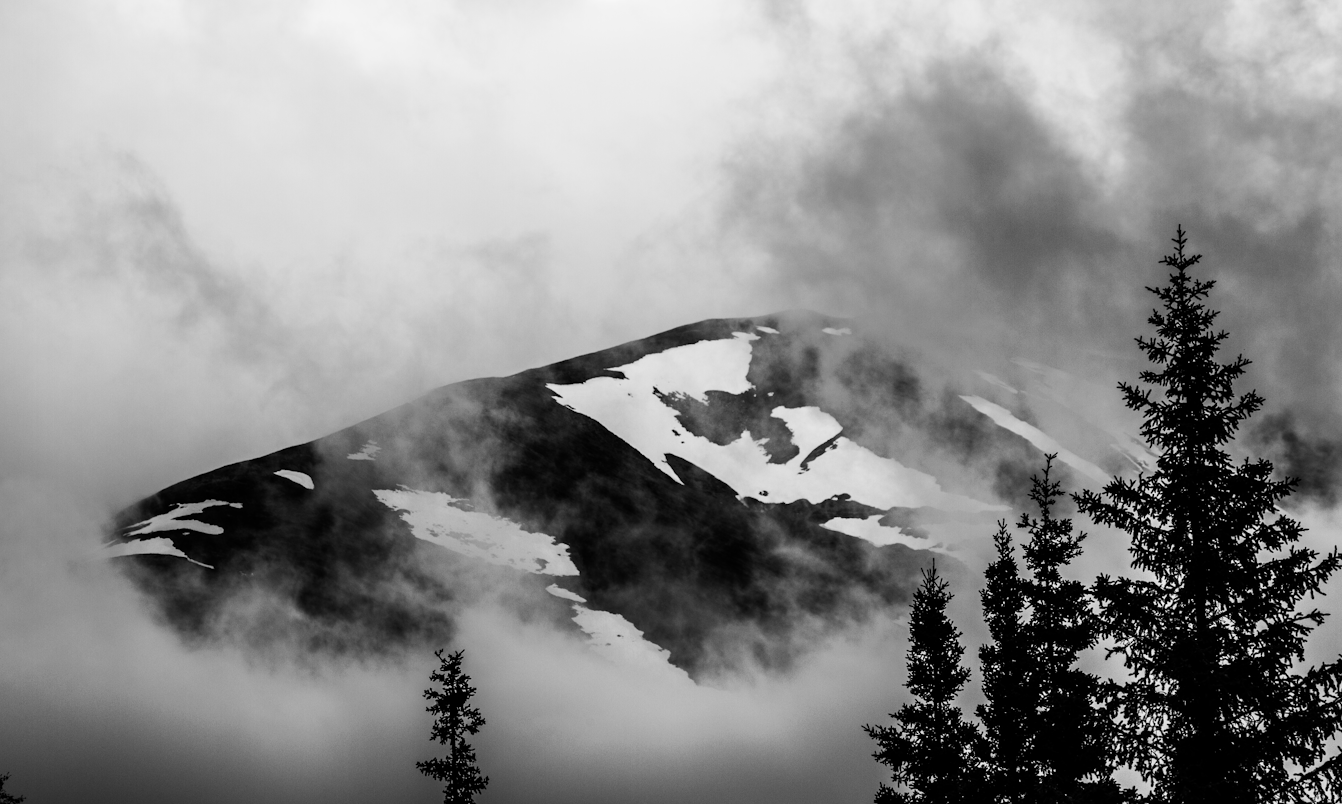 The drive south of Anchorage to Homer was covered in clouds, a low-hanging roof of cool grey lighting and mystical shrouds for the top of the nearby peaks. The road hugged the inlet, and we were suddenly on our adventure again. After spending so many days in one place, it was new and exciting to be on the road, yet we were reminded of the tourist season and bad drivers. This was a two-lane highway, and there were a lot of drivers chancing it with some creative passing choices.

As we got closer to Homer, the air got cooler and cooler. I wished that I had plugged in my heated gloves and boots, as my fingers were starting to freeze in their curled position around the handlebar grips. It was only about 24 more miles of this kind of cold before we popped over a hill and turned out at a scenic overlook. You could see the peaks and volcanoes across the bay, and it looked like a blue-white cold day down there. We were hungry, excited to find some places to camp, and forgot that it was a Saturday.

We rode down “the spit” to see if there were any fun food options, and were surprised to see flocks and flocks of RV’s, and the occasional tent. It was so windy out on this piece of sand and rock, creating a harbor for the boats to come in with their catch. The eating options were geared towards the affluent tourist, not the price-conscious consumer, so we turned around and headed back into town. While looking for the “downtown” we rode a few streets and figured that we had indeed found the local hangout. A gravel parking lot full of trucks, the live sound of cover tunes floating outside, we decided to give this place a whirl.

Walking into the large barn-shaped bar with wooden rafters, wooden dance floor, tall windows and low prices, we were glad to have stopped here. We each got the halibut special, which was locally-caught, and were surprised at how amazing the dish tasted. We scarfed our entire plates, crumbs and all, and went to find the campsites in town. We slowly put it together that the in-town options were fully-booked, since it was so windy on the spit, and we reluctantly headed back down to the sandbar around a barely-dusky midnight. Finding plenty of campsites way out on the end, we quickly set up and headed to the Salty Dog for a bit of warmth. Fortunately, it was so late in the night that the wind had died down, but our spirits needed some picking-up.

Apparently, the Salty Dog is the famous bar where the crew from The Deadliest Catch gets their land legs back, and let me tell you, this was the saltiest little bar I’d ever been into. Low-ceilings, almost cabin-like but perhaps for leprechauns, every imaginable surface was covered in dollar bills that had been scrawled with signatures or sayings. We wove our way into the fully-packed bar, local young fisher-men and their lovely ladies sloshing up the isles. We heard stories of how unexpectedly windy that day had been-many boats going out to fish in calm waters, suddenly surrounded by 4-6 foot waves and fog. Some boats weren’t equipped with GPS, so they had to guess their way back to harbor… long days for all.

The bar was loud, but quiet for music. We quickly remedied this, spending our dollars in the corner jukebox instead of decorating the walls. Air-guitaring riffs to Nirvana, Pearl Jam, and Alice in Chains brought a fire back in our hearts where there was only cold wind before… oh I love rock & roll.

The next morning, we woke up to sunshine and calm. We had conversation with local fisher men, most of whom lived elsewhere, but came during the summer. We learned some great new words, our favorite being “Drainbows” and is used to describe transient folk who float around without contributing. We laughed so hard, and have continued to laugh throughout this trip, reminding ourselves not to be a drainbow when we visit new places or friends 🙂

We also found out that Homer was in for about a week of rain, and it was supposed to start today. This was a good time to head north, because Fairbanks was boasting record highs and clear skies.