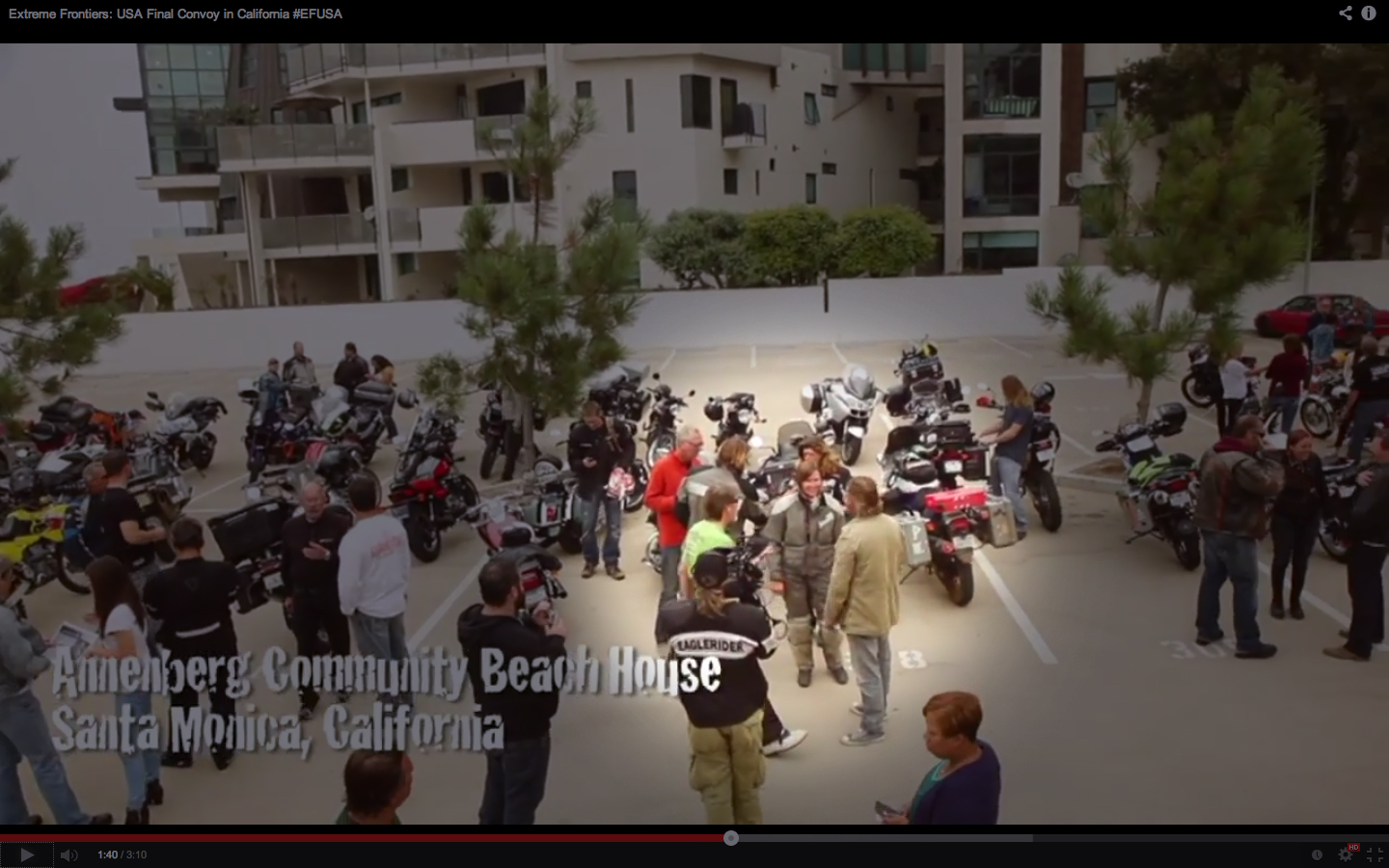 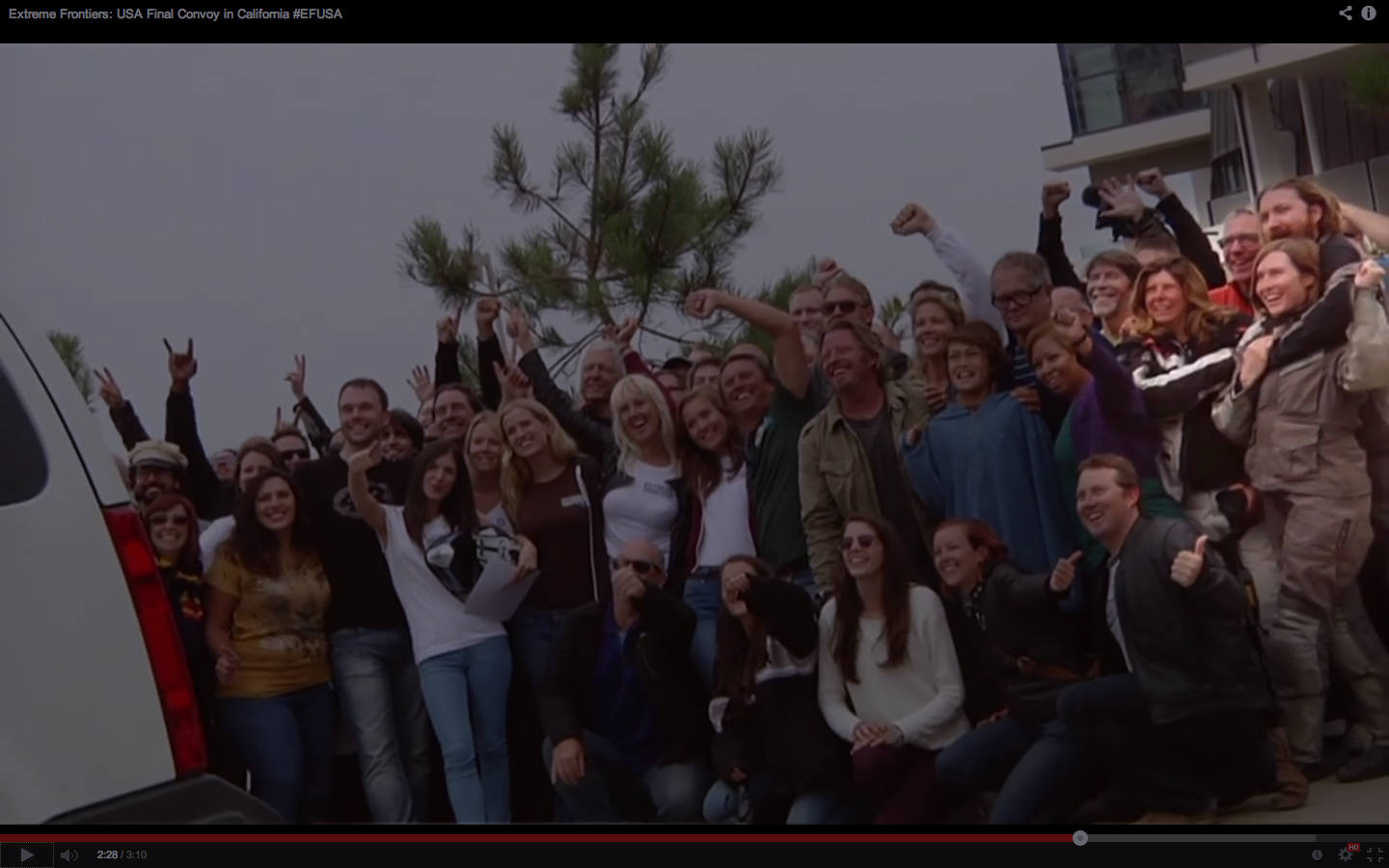 But not really. And it all started when we got home and finished our adventure… again, not really.

We were departing San Luis Obispo on our way home, our “last day” of the trip, and quite sad to see the adventure end. When, we looked up from the tears in our eggs and hashbrowns to see Charlie Boorman, from the Long Way Down and Long Way Round motorcycle adventure series with Ewan McGregor.

Bear & I had no choice but to shamelessly get up, walk over to his table, interrupt him and his wife, and introduce ourselves. We were so enthralled and inspired by the Long Way adventures when we were learning to ride, and we could hardly believe that this “coincidence” was happening.

Charlie exuberantly informed us that he was in the middle of filming the closing episode of Extreme Frontiers: USA edition, and there was going to be a group ride in two days from Point Magu to Santa Monica. And, we were invited to join!

Holy cow, yes. Sign us up. Wait… did he happen to say that it was at 8:00 am? Oh boy. Well, we were in, and in spite of only getting 5 hours of sleep the night before, we were  suddenly driving out of the mountains of our home, down to where the 1 hits the coast south of Oxnard.

If this wasn’t tangible, hard proof, that everyday can be an adventure if you’re just willing to show up for it, then I don’t know what else could have walked into our lives that morning.

Bear & I were energized and encouraged that even with how much our lives had changed this summer, we were bound to continue on the path we had beautifully found ourselves on. Best of all, our dopplegangers from the Netherlands were here to join us, Aad and Marja.

The four of us eventually found the secret parking spot where the hot coffee and tiny cupcakes were located, and promptly began eating our breakfast snack. Slowly but surely, more and more bikes arrived. As the parking lot filled up with local adventurers, the four of us quickly realized that maybe we should have showered, or at leased tried to scrape the bugs off of our teeth before arriving. Everyone’s bikes were so shiny and clean, while we still had dirt and chain lube caked all over our machines from the 10,000 miles of adventure we’d just been on!

Fortunately for us, the dirt and our matching motorcycles were not only attractive to flies, but also the cameras. Bear’s stunning blue eyes and personality filled the parking lot, and we found ourselves being interviewed! It was so exciting to be a part of this part of adventure, where other people had the cameras for once, and I didn’t have to check to see if Bear had turned on the Go Pro.

Maybe that would have helped though, because as we were getting ready to ride down the road, we all realized that we forgot to charge our camera batteries the night before. Well, this was just meant to be a living memory…

Charlie started his bike, the camera crew started their bikes, and we all prepared to head down the road. I had never ridden in a group this large before, and we weren’t necessarily following the rules of the road. I’m not going to lie, it was very exciting to be part of a biker gang, taking up both lanes of California’s Highway 1, heading down to Santa Monica. Bear & I had driven this many times before, always in a car on our way to gigs or family outings. To be on our bikes, in a herd of motorcycles this large, was a total thrill.

I could go on for days, and have been periodically checking in with the Extreme Frontiers website to see if the episode has posted, but I’m going to just post some screenshots from the Youtube promo as a teaser… I think it would be a blast if Bear’s interview made the final edits, or at least some sweet shots of our bikes in the early morning mist… but we’ll just have to wait and see.

In the meanwhile, every day is still an adventure, my bike awaits an oil change and many more miles before the winter rains hit…

We’ll see you down the road!