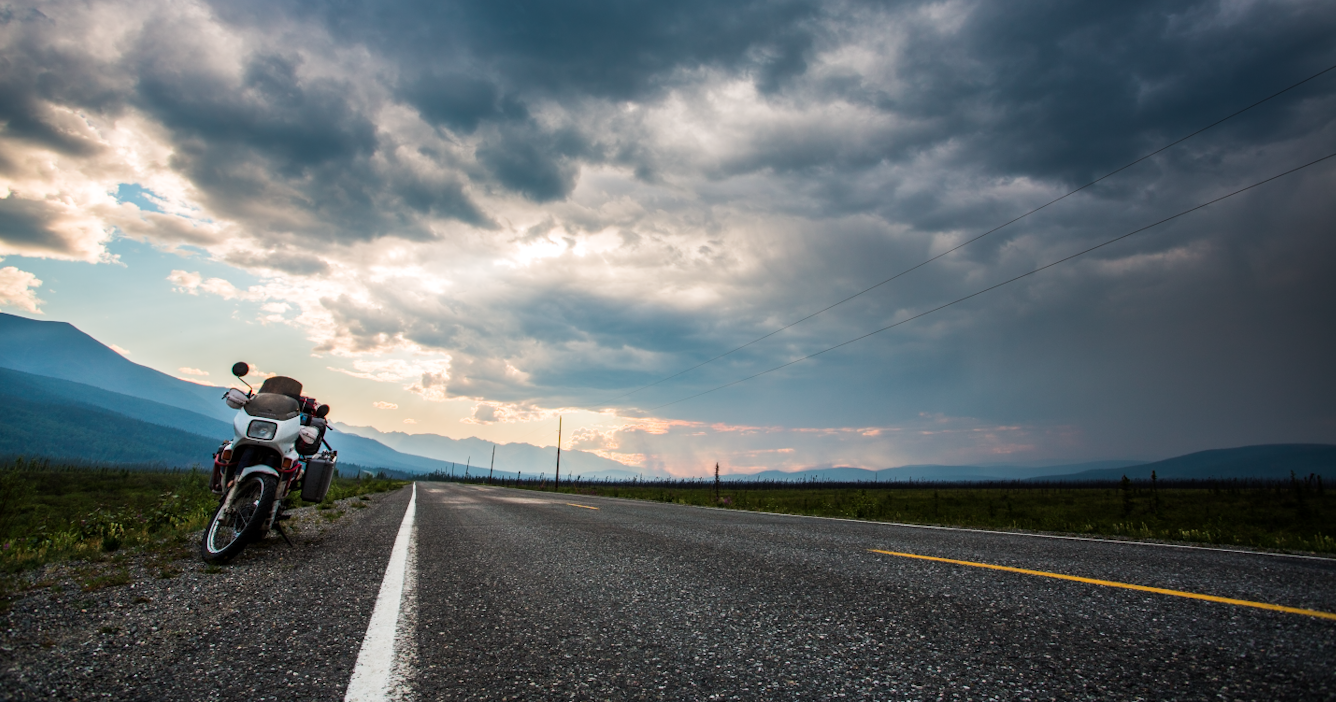 There were many times on this trip that people would look at us and say, “I bet you would like Talkeetna. It’s kind of hippy-dippy… you know, an artist community.”

We thought they were being helpful, but we also noticed that they would say this in a tone of almost embarrassed distain… like they were ashamed to suggest such a town, but accurate in reading Bear & I, so they suggested it to us despite their own distaste for the town.

The distance from Homer to Talkeetna isn’t so bad, but we did make some generous stops along the way. It was a Sunday, after all, and there were still some proud garage sale signs. I got so excited seeing them all, and we decided that the next one I saw, we would stop at. Boy, am I glad we did! We went down this road to a sweet older couple, who had so many good things for sale! Vintage Pendleton wool shirts, (yet accurately priced, so a bit out of my range), classic suit combos from the 70’s, and one beautiful black cape jacket. I couldn’t resist the $6 price tag, and also picked up a sweet navy blue cowl-neck dress for $3. What a good day. Bear found a totally appropriate dark brown corduroy vest with sherpa fleece lining, and it has come in handy on more than one occasion. We headed back north with some smoked salmon, hand-caught by the folks running the sale 🙂 They were so excited to have motorcycle guests from California, all the way out to their house!

We rode and rode, stopping at our friends again in Anchorage to say our final goodbyes. I petted all the kitties, especially the beautiful Ida, and we continued north to the famous Talkeetna. It was about 10:30pm when we arrived in Wasilla, I had all kinds of intentions of taking photos of signs and things, but our hunger trumped our timeline. The IHOP is such a welcome sight on a trip like this, you know that you’re going to get consistently delicious food at consistently affordable prices. Plenty of hot coffee with a top-off in the thermos, and we were back on our way. The clouds were making some incredibly beautiful and daunting formations while we were inside, the hot air from further north mixing with the cold air off of the Pacific blended to create waves of grey just above our heads. It was beautiful, and urged us to start putting some miles under our tires.

The clouds dimmed the already dusky sky, and we were experiencing something that one would call “dark”. Our motorcycle dash became apparent, shocking at first, when I wondered if something was wrong that there was lights behind my RPM dial, then I realized “Duh! This is what it’s like when there’s darkness!” What a strange realization, after so many days now without it!

The rain started to come down as we were driving through a construction zone. It was so late that at least there weren’t any workers about, and the rain kept the gravel well-packed and fairly solid. We kept motoring along, slowly getting closer to our camping spot for the night.

Bear had called ahead to a hostel in Talkeetna, who was fully-booked but offered their backyard for camping. When we arrived, we didn’t realize that the yard was under construction, and full of puddles and mud. We didn’t want to set up our tent in the rain, and in the mud! So we opted for the front yard, hoping for forgiveness if this wasn’t proper.

We ruled at it. I’m not sure how much time, maybe less than 7 minutes. But it was fast enough to get under the vestibule and take off our soaking suits, step into the sleeping portion and fill up our air mattresses. We were soon in our sleeping bags, quickly high-fiving each other for such a great ride through such difficult situations.

I was almost asleep when I heard someone walking around by the woodpile, which was about 3 feet from my head. I could feel that they were lurking, and I didn’t know why they would be hanging out there… I started to get a little angry and suspicious, worried that they were going to try and steal something. In my head I told them to back away, but then I realized that I was being too angry and paranoid. I calmed myself down, and instead told them that we were just here to sleep, and to please leave us alone. I quickly fell asleep.

When I woke up, Bear had a similar experience, except he had actually opened his eyes and stayed awake a little later than I had… he had seen a moose antler gently poking the sides of our tent, tracing its contours and testing it’s resistance!

How incredible that animals sound like people, and the things we make up in our heads are sometimes worse than reality… It can be difficult to remember that animals are inherently curious creatures, and can clearly pick up on our intentions. I was glad that the moose had stopped by, and it was neat to think that he had “blessed” our tent 🙂

When we stepped out of the tent, it was still raining. The camping at the hostel was very affordable, so we decided to stay another night and try to wait out the rain.

This was the first time that we had camped two nights in a row somewhere, other than staying at a friend’s house. Camping is different-your routine is built upon setting up and tearing down. Once you’re set up, and you decide to stay set up, you suddenly have more time on your hands. We decided to spend the day walking around the tiny town of Talkeetna, eating at as many places as we could.

We were starving, and didn’t realize that it was already 2 in the afternoon. We had apparently gotten to town around 2:30am, and probably fell asleep around 3:30. We had finally gotten lots of rest, but definitely missed breakfast. Mile High Pizza Pie was recommended, and we shared a sandwich and salad. The food was so good, but we were still hungry! So we went to the local brewery and tried a beer and shared an appetizer. We browsed National Geographic magazines while taking our time with our second meal, and grew sleepy. On the walk back to our tent we stopped by an art faire, and talked to the local photographers and artists. We were still sleepy, and headed back to our tent for a nap. Sleeping from 6 to almost 9, we were hungry again and ready for dinner 🙂 At this time, not too many places were open-just the pizza place or brewery. Well, we had been to both already, so why not the pizza place again! We shared a large pizza, devouring the entire thing, and were ready to sleep again. What a great town! While we had eaten our meals, we people-watched all day.

This town was so cute, and so much like Los Olivos we could hardly believe we had left home.

We went back to bed, and slept until the next morning.

Waking up to sun, we quickly got up and started tearing down camp. Stuffing sleeping bags, rolling sleep mats, we got everything put back together and ready for the bikes. Our tent was still soaked, but we knew it wasn’t far to Fairbanks, and the sun and heat we had heard about. Our last food stop for the morning was a lovely cafe, with generous portions. We shared one breakfast plate, and couldn’t even finish it all! The home-made bread with home-made apple butter was like a desert, and we were ready to head north. Perfect timing too, because the clouds had already started to gather again, looking like more rain in Talkeetna!

It was funny to leave a town that felt like home, and remember the advice that people had given us in recommending the town to us. Well, they nailed it! We loved Talkeetna! It wasn’t too hippy-dippy, I think it’s probably grown a lot since the 90’s, when it inspired the hit show Northern Exposure. We did love all the food, the tiny layout, and the ease in which people strolled about.

The similarity to Los Olivos was also comforting, in that “other side of the coin” sort of way… It really is fun to indulge so much without having to travel very far. We also loved people watching, realizing that the fashion show, in contrast to home, was “Not about the Sean John’s, it’s about the long-john’s!”